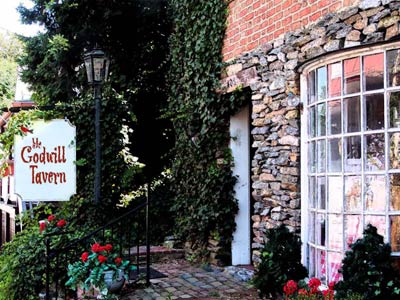 I’ve known God’s love through its many manifestations: my husband, the myriad of other Souls who came and went in my life, even my cats. But it was never enough. I wanted to know God, up close and personal. Metaphorically-speaking, I’d shake my fists at the sky and cry for God-Realization. After one prolonged period of trying every technique I knew, I was given the following experience as I slept.

I awoke in the dream as Cencea. I was sitting in a tavern of huge proportions, the size being a sure sign that I was no longer in the physical world. Engaged in a lively philosophical debate, I huddled with three friends at the end of a long, roughly-hewn wood table.

The dream had my attention right away. One of my most favorite things to do in the waking world is to sit around with friends and talk the good God stuff while eating things like pasta and bits of bread dipped in seasoned olive oil.

The dream fare was a little different than that. Various bowls and eating utensils were scattered in front of us, the remains of our late evening supper. A creamy-colored ceramic bowl held hardened chunks of stonebread. I knew it to be sweet and soft and sensuous when freshly baked, but stone-like when left beyond the time it takes to consume a meal—hence its name. A slice of green pianti cheese, the edges petrifying with each passing moment, lay abandoned on a clay platter. A purplish fruit had stained, if only slightly, our lips and fingertips.

Once the sights had become familiar, I settled deeper into the dream and tuned into the sound.

Mica, moistening his finger and collecting stray bits of bread off the table with a stabbing motion, spoke in an impassioned whisper. “Finding the way to G-G-God, s-s-seeing the face of God, merging with God....I am being made m-mad with God fever.” His pupils were black circles with no visible iris. “Have we t-t-tried every m-m-method? Every practice? W-w-what do we do next my g-good friends?”

In my waking world, I didn’t know who these people were, but obviously in the world of dreams, we were tight, as they say, and plotting a means by which to storm the gates of heaven.

Toma, usually the quiet one, poured everyone tea from an oddly-shaped blue pot. Then he suddenly rose to his feet, took his cup in both hands and held it upward, arms fully outstretched. “Tell us, God, what more do we need to do?” he wailed without restraint. “What more do we need to be?”

I may have been embarrassed by his display in the waking world but in this dream world I didn’t care. I wanted to know God as much as the others did. If it required running naked in the streets, I would have done it. As Cencea, I used hand gestures to encourage Toma to wail louder.

“What more, God, what more do you want?” he pleaded. He paid no heed to the still-hot tea that sloshed out of his cup and onto his hands. Droplets landed with an exaggerated plopping sound on the wooden table top.

Historically, God has always responded to madmen. I wondered if Toma was mad or merely mocking it up in hopes of tricking God into answering his call. Distracted from my thoughts, I turned and looked in the direction of a tiny voice belonging to a young woman, perhaps only fifteen years of age, who was now sitting at the far end of our table. Bretha, also noticing the girl, hushed our group and asked in a whisper, “What did she just say?”

The young woman had a perfectly round face, dark hair that fell straight to her shoulders, and the most innocent of light-filled eyes. She repeated her words, a little louder this time, “I have had a God-Realization experience.”

Without further invitation from any of us, the girl spoke again. “Yes, I have had a God-Realization experience,” she said, “but I have also learned an important lesson. Meeting God is not nearly so important as being in perfect alignment with the Godwill.”

Mica, crumbs forgotten, spoke first. “D-did you hear? She said ‘Godwill’ as though it were a s-s-single word. Godwill.”

The others nodded and took turns muttering the word to themselves. Godwill. Godwill.

“Godwill,” I repeated in my turn.

I said the word aloud upon re-entering the waking world. “Godwill.”

“What did you say, sweetie?” my semi-conscious husband asked, rolling over on his back. “Did the alarm go off?”

Not an alarm perhaps, but certainly a wake-up call.