The nature of relationships is a curious thing. Some people are inseparably drawn to one another like opposing poles of a magnet. Likewise, any attempt to bridge the space between the repelling sides of two magnets is futile.

My stepfather and I were in the later group, dancing around each other without ever touching. I often asked the stars at night how a man could feed, clothe, school, entertain, and yet, not love me, something I desperately thought I needed.

I was well into my adult years when the answer came to me in a dream. As my body slept, I had a bird’s eye view of Ireland, the Emerald Isle. On the northwest coast, I witnessed rock cliffs that rose hundreds of feet above a cold and treacherous sea. I saw a small thatched-roof cottage, my once-upon-a-time home, situated close to the edge of those cliffs. I observed sheep in the distance, far too many to count, corralled by stone walls.

With dream intuition, I knew that the too-thin, ten year old girl sitting on one of those walls was me three hundred years in the past. There was a man in the picture as well, an uncle, in the typical Irish cap of the period. He carried a twisted cane.

As I watched from above, he grabbed me off the wall in a drunken rage and whacked me at the side of the knee for having lost sight of a younger brother who had been left in my care. Many such beatings had eventually left me with a crippled right leg. His ofttimes cruelty, and general failure to provide for his family, had scarred my tender heart.

My stepfather, who was of Irish descent this lifetime, was my uncle in that past life. Like many Souls with unsettled debts, we were back together again, this time in America. Were there other lifetimes together that had led to the life in Ireland? No doubt. But I did not need to see all of them. Replaying our history together in Ireland was the key to unlocking the current karmic dance.

In the 1940s, a military jeep overturned and badly mangled my stepfather’s right knee, causing much suffering for most of his adult life. It was part of what fueled his drinking problem, his anger and jealousy. Watchful of his dark moods, our family was always in a state of uncertainty, always on the verge of some terrible upset.

The mutilated knee was karmic payback. And beyond that, he also did something this lifetime that he had failed to do in Ireland; he provided for his composite family as best as he knew how. He often said that he was who he was and could not do any better than he did.

In later years, I understood that his lack of love did not have so much to do with me as with his nature; one he felt he couldn’t change. The reasons for that are a part of his private story. But needless to say, by providing for me in this lifetime, he paid a debt he owed.

Of course, there are always two sides to every relationship. Before he died, gratitude and forgiveness took me to a place where I could finally love him without condition. I had learned that being loved was not so as important as being love. 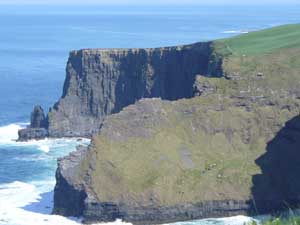