Please allow up to 24 hours to receive your book by email.  Please be sure to enter a valid email address. If you haven't received your book by then, please check your spam folder or contact me at jo@jeleonard.com 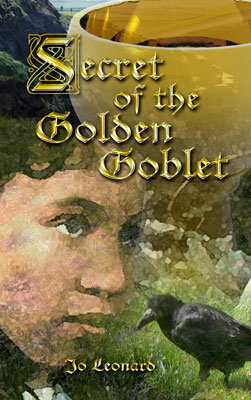 Secret of the Golden Goblet

Petre had never had an adventure. Not in all his life had anything exciting happened to him. Never. Ever. And now this.

The old woman came out of nowhere. She’d pressed a mysterious bundle into his satchel while he stood in the marketplace looking in Madille's tubs for the best bits of fish. Hurriedly retreating back to his formidable tree house, Petre discovers that the rag-wrapped bundle contains a golden goblet.

His peaceful life is quickly shattered when fiery arrows begin to pepper his house. The assault marks the beginning of a fight for possession of this plain-as-plain-can-be goblet. With the appearance of a beautiful shape-shifter and her fly-dog, Petre learns that he is tasked with returning the goblet without delay to its real home in another dimension. With the goblet missing from Astra Land, all creativity has ceased, bringing the evolution of mankind to a standstill. Petre is warned: That which does not go forward, goes backward.

Given little choice, a terribly perplexed Petre embarks upon a journey that takes him beneath a mountain, into a village of seers and across a treacherous whispering sea to the den of the pirate, Golly G Jon. As he journeys with his trusted canine, Teapot, Petre manages to collect allies—an unsufferable lad with a secret, a French-muttering magician by the name of Myrtlebean, a lovely-to-behold near-blind seer, and three warriors.

Petre and the goblet are pursued by five evil Brothers who wish to possess the goblet and its power for their own glory. Even when they capture the cup during one of Petre’s many mishaps, they continue to relentlessly hunt him for the knowledge of how to activate it.

In time, the reluctant hero discovers his long-forgotten destiny as the keeper of the cup. He literally grows back into himself—having long ago thought himself to be the disguise he once adopted. If Petre can find the strength to withstand the seductive powers of the Brothers Five, regain the cup, and enter an unstable, thunderous vortex, well then, the secret knowledge of the golden goblet will be restored. If…

What began as a book for young adult readers has quickly become a favorite of fantasy lovers of all ages. The pages of the Secret of the Golden Goblet are filled with life-threatening adventures that are laced with humor and rewarded with self-discovery. The life lessons of Petre and his troup are the reader’s gain as well.

325 Action-Packed pages in PDF format. This book will keep you spellbound to the very last page!